Banja Luka ows its rapid growth to the first ban, brisk and energetic Svetislav Milosavljević (Svetislav – Tisa Milosavljević, born on September 07, 1882 in Niš, Serbia). On November 08, 1929, he came to Banja Luka and commenced with his rule over the Vrbas Banovina. Namely, under the given historical circumstances, it was in that year, exactly 75 years ago, that Banja Luka became the seat of the newly founded Vrbas Banovina – one of the nine administrative units of the kind in the then Yugoslavia.

Svetislav-Tisa Milosavljević faced a very bad situation in our region. According to all the applicable criteria, it was classified as the least developed administrative unit of them all. However, he did not hesitate. On the contrary, Milosavljević was a fighter and a visionary. He did not wait long to roll up his sleeves and start his gigantic unprecedented enterprises in the entire Banovina, and in our city in particular.

In less than four and a half years of his rule hundreds of primary schools, bridges, and kilometers of roads were built, and many economic, cultural and sports institutions were opened.

The general progress was particularly evident in Banovina`s capital, Banja Luka,  which in those four and a half years got many representative facilities and institutions that still serve as its pride and joy. As early as December 01, 1931, Ban`s Palace, todays City Administration building, was built. In less than a year, on November 08, 1932, Banski dvor was officially opened. The National Theater and the Vrbas Banovina Museum were founded in 1930, and four years later they were dislocated to the Theater`s current building, a temple of culture, which  embellishes our city even today. 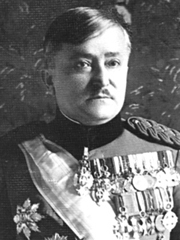 Seven buildings for City Administration officials were built in the Saint Sava Street and near the Post Office.  During those years Palas Hotel was also built, and Bosna Hotel was annexed and modernized. The city park was also developed and got embellished with a monument raised to the memory of writer Petar Kočić. Sokolski dom and the Public Institute of Hygiene were also constructed. Banja Luka got its first asphalted streets, the Central Banovina`s Tourism Association was established, and the Vrbas Newspaper launched. 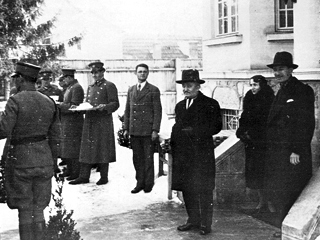 During his office in Banja Luka, ban Milosavljević put its best efforts into helping finish the construction of the Saint Trinity Church (Hram Svete Trojice), which has been being rebuilt at the same spot under the name Christ the Savior Church. The Orthodox Banja Luka Parish appointed ban to be the godfather in the consecration of the church on the Ascension Day in 1939.

Ban Milosavljević left the city on an evening train on April 22, 1934 and went to Belgrade as he had been appointed the minister of transport in the kingdom`s government. The local authorities planned to organize an official farewell ceremony for him, but he, as humble and modest as he was, refused the idea and donated the money anticipated for the farewell for charity. However, around 10 000 citizens gathered spontaneously and lined up in two farewell queues that stretched all the way to the Railway Station (today`s Gallery). The magnificent farewell was headlined in many newspapers in Belgrade, Zagreb, Banja Luka and elsewhere. Many cried.

As far as it is known today, it was only one more time that Svetislav Milosavljević visited Banja Luka afterwards. It was on the Ascension Day, May 18, 1939, when around 20 000 Banja Luka citizens gathered in Banja Luka to greet him. Many of them were delighted to have seen their ban again.