From September 6 to 8 this year Banja Luka will host the first „Kuvo Gaming Fest“. As it was announced, this festival would also consist of a competition.

On behalf of the organizer, Sergej Sliško said that many educational and entertaining workshops would take place on the Kastel Fort.

„Kuvo Gaming Fest“ has been supported by the City of Banja Luka and Mayor Radojicic said that the project is totally in compliance with Banja Luka’s image as an open city ready to position itself on the regional map in many different areas.

A festival team member and the executive manager of Aquarius Agency, Brankica Jankovic, said that the agency was glad to support the idea, which came from young people, and stressed that the festival is important in many different aspects.

Special ambassadors of the forthcoming event will be regional YouTube stars, Choda and Baka Prase. 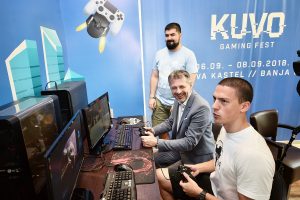