The best students of primary schools on the city’s territory were awarded season tickets for water park Aquana. The best students were handed in the tickets by Mayor Igor Radojicic, who stressed out that this was just a symbolic gesture to show appreciation for their hard work. It is also an opportunity to focus public attention on the best students of our primary education.

– This has been a nice tradition for years. These are the best students of their generation and they should be a role model for their peers. I would like to remind you that the City of Banja Luka also provides scholarships to secondary and university students, which means that the students awarded today certainly will have opportunity to compete for city’s scholarships. The amount of 1,6 million BAM was earmarked for scholarships, and competition will be announced in the autumn – Mayor Radojicic said in his address to the students.

The ticket award was organized by the City of Banja Luka and Public Institution Aquana with the support of companies „Mlijekoprodukt“ and „Elta Kabel“. 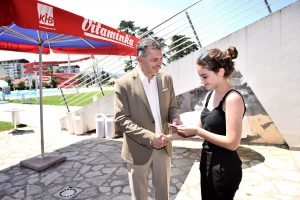